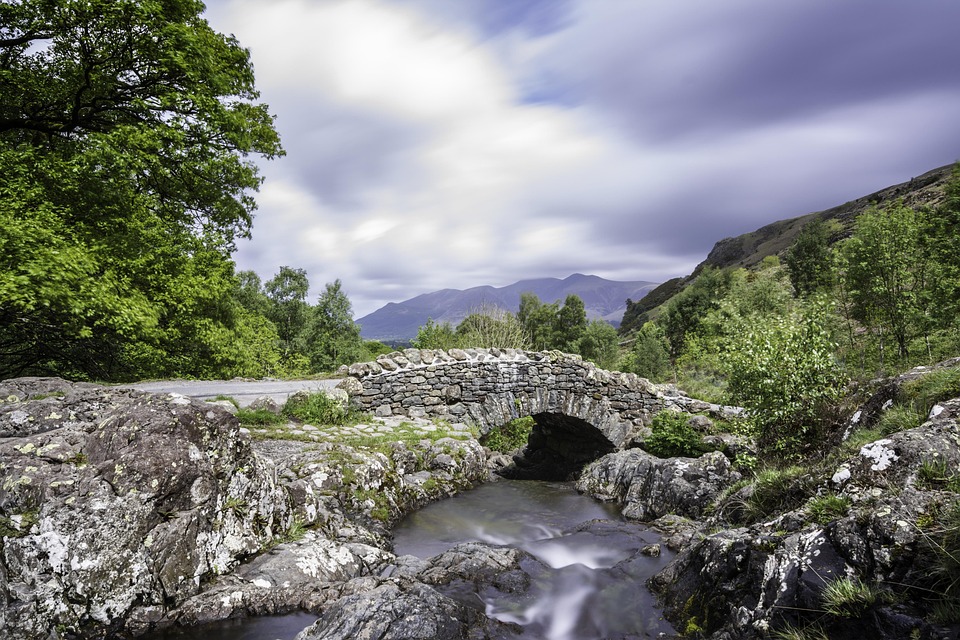 Misty had had many jobs in her life, including several years as a secondary school teacher in a school in central Oxford that was, in official paperwork, described as ‘challenging’. As a consequence, she had developed the knack for that particular clear, penetrating kind of voice that is definitely not shouting, but which nevertheless causes everyone within earshot to freeze.

So when she called out to two teenagers apparently caught in an altercation with a bridge troll, everyone involved did, indeed, stop.

Oh well, in for a penny.

The bridge they were standing on was humpbacked, made of old, water-stained stone. The well-established trees on either side of the path that led to and from it threw everything into dappled, cool shade. In the sudden silence, the repetitive, shrill call of a woodpecker could be heard.

The troll, despite being only slightly larger than the average human, was looming over the teenagers and did not look happy. Their – Misty never liked to assume gender – skin was mottled in dark blues and greens, and matched the water of the small river so that, Misty imagined, in the pool of black shadow under the bridge they’d be very nearly invisible. The two teenagers were fairly young, she thought, perhaps fourteen or so, and wearing jeans and hoodies and far too much attitude. The one closest to the troll, and thus being loomed at the most fiercely, had long, dark hair tied in a ponytail. The hair of the other was short, spiky, and dyed a caustic shade of pink.

The troll looked up at Misty. ‘I was minding my own business,’ they said sharply, ‘when these two started throwing stones at me.’

‘We were just throwing stones in the water!’ protested pink hair. ‘We didn’t know it was down there!’

‘My name,’ said the troll, eyes glinting in the uneven light ‘is Imenta.’

‘I’ll thank you to be polite,’ snapped Misty, her voice belying the fact that the grumpy, but nonetheless reasonably articulate, responses were reassuring.

Ponytail looked at her defiantly. ‘A troll! They hide under bridges and stop people crossing and scare people on purpose. Why’d we have to be polite to trolls? They ain’t people! This is stupid!’

‘I live under the bridge,’ said Imenta, a trace of weariness now audible in their voice. ‘I’m not hiding, I’m minding my own business. And I don’t scare anyone on purpose. You startled me, that’s all.’

Misty carefully adopted the most neutral expression she could manage. ‘Imenta may not be human,’ she said calmly, ‘but as you can see – I’m sorry,’ she turned to the troll, ‘do you prefer particular pronouns?’

‘Oh ffs,’ muttered ponytail, actually pronouncing the letters. ‘What next?’

‘It’s polite to ask,’ said Misty, not looking at the teenager, ‘no one likes it when someone gets that wrong, including you, I’m sure.’

‘She,’ said Imenta, ‘and thank you. Most humans assume trolls are male. It’s refreshing to be asked.’

‘You see,’ said Misty, turning back to ponytail. ‘As you can see, she may not be human, but she is a thinking, talking person. You’ve trespassed on her home, caused a disturbance, possibly even injured her, and somehow,’ Ponytail’s mouth opened, and Misty’s voice developed a tone with distinct harmonics of: you’ve lost this one. Don’t even think about arguing with the ref, ‘Inexplicably, rather than apologise, you’re apparently trying to find reasons that you’re entitled to be annoyed by the situation.’

Misty looked at the teenager, and silently sighed. She’d been young and stupid once, too. ‘What’s your name?’

‘I ain’t telling you my name!’

The youngster with pink hair, who’d been studying the floor with the intensity of a detective hunting for clues, finally looked up and said, quietly, ‘It’s Charlie. And I’m Bri. And we’re both he, just so you know.’ He glared defiantly at Charlie, who glared back. ‘Oh, come on, mate, get over it. She—’ he paused and looked at Misty, who nodded. ‘She’s right. We were chucking stones. I’d yell and get annoyed if someone lobbed a bit of granite at my head, too. And you do freaking hate it when people call you she ’cause of your long hair, so just shut it.’

‘Mate. Seriously.’ Bri turned to Imenta. ‘We’re sorry. We didn’t know you were down there, and we weren’t thinking. Next time we’ll be more careful.’

Misty considered saying that merely throwing stones carefully might be missing the point, but decided against it. If she’d learned anything in her life, it was that when you sense an oil tanker of an argument shifting in the right direction, it’s often better to let it get there slowly than to risk oversteering.

‘Thank you,’ said Imenta, graciously. ‘Perhaps I won’t eat you, this time.’

Imenta made a sound like water running over pebbles.

‘Lads,’ said Misty, pointedly, ‘I think it would be a very good idea if you were on your way now, don’t you?’

Bri nodded and, looking somewhat relieved, grabbed Charlie’s arm and dragged him past Imenta and onto the path on the other side of the bridge.

The human and the troll watched the teenagers as they disappeared around the bend. ‘Thank you for that,’ said Imenta, after a few moments.

‘Obviously I can defend myself, but, well.’

‘You’d rather it didn’t come to that.’

‘Quite so. I really should have ignored them, but the little monsters caught me right in the ear.’ She rubbed the side of her head. ‘I’m afraid I rather lost my temper.’

‘And without a witness…’

‘Precisely. We have a bad reputation as it is. Two teenagers crying wolf, so to speak. Well, you can imagine. I like this bridge. I’d hate to have to move.’

‘We didn’t ask your name,’ added the troll.

Imenta’s face quite literally cracked into a smile. ‘How wonderful. It’s lovely to meet you, Misty. I have tea, under the bridge. Would you care to join me?’

‘Oh, thank you, really, but if I get under there in these heels, I’ll never get out again. Perhaps another time, when I’ve got my jeans and wellies on?’

‘I shall look forward to it,’ said Imenta, extending a hand.

Misty took it. It was cool, and surprisingly dry. ‘Me, too,’ she said.

Author’s notes
A gentle little low-stakes story that reminds us, I hope, to be kind.

2 thoughts on “The Two Teenagers Truculent, or Why You Shouldn’t Throw Stones Under Bridges”

This site uses Akismet to reduce spam. Learn how your comment data is processed.