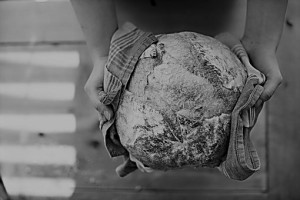 At the edge of time, in a small corner of the universe, a woman is baking.

It’s a simple kitchen of wood and stone and metal. There are bowls, of course. Many of them, in all different shapes and sizes. Some have the orangey-pink hue of copper, others shine silvery bright, distorted reflections twisting on their curved sides. There are spoons, spatulas, knives and cups. A rolling pin that is a cylinder of heavy, glossy rock. Boards made from well-scrubbed wood. The room is quiet, filled only with the small sounds of someone working. It smells of fresh bread and warm sugar, sea-salt and hot iron.

There is an oven, too. Huge and black, and glowing inside: red and yellow and even, sometimes, white.

Either way, her skin is lined and creased with the marks of life. Deep grooves curve from her nose to her mouth, creases stand to attention where her forehead meets her nose, and the skin around her eyes is slashed with lines. Her head is covered with firmly-tied scarf covered in geometric designs, but the rest of her clothes are undecorated. Brown fabric, roughly woven. A white apron, brilliant in its blankness.

Tiny, blue specks burn in the centre of each of her eyes.

She is stirring a mixture, one strong arm cradling the heavy bowl almost as if it is a child. Her other arm moves the spoon round and round and across and round. The batter is thick and dark, and slightly oily. She examines it critically and adds other ingredients. Half a cup of this. A spoon of that. She stirs again and the mixture begins to shimmer.

Eventually she pours it half of it into a silvery pan, a perfect hemisphere balanced on a torus. There, she pauses, and takes something glossy and dark red from the pocket of her apron. She lifts it and turns it this way and that in front of her eyes, frowning a little. With the faintest of nods, she presses it into the centre.

She uses what’s left in her bowl to pile up and up. The mixture is firm; it holds its shape. She leaves the top slightly flat. Space for it to expand. Exactly how much space to leave is a judgement she makes from old experience.

She places a second, shiny hemisphere over the piled-up mixture and fixes it with wire. A perfect silver ball, ready for the warm depths of her oven.

While it bakes she mixes other things. One bowl contains something blue. Mostly blue. It also swirls with green and grey, and tiny peaks of white. Another is a darker green, rich and glossy, a third is ochre and rust, and a fourth is fluffy, barely there at all.

The woman pauses, places her hands into the small of her back and leans back, looking out of her kitchen window, at an indigo sky broken only by pinpricks of light. She wipes her hand across her head, leaving a pale smear across her skin.

The baking takes time. But she cannot rush this; the centre must be hot. Eventually the thin metal skewer she carefully slides between the two half-domes makes her wince when she pulls it out and presses it against her cheek.

Carefully, she removes the tins. The cake is not quite perfect. Despite her efforts, and all her experience, the shape is slightly distorted. She tilts her head to one side and examines it. It doesn’t matter, she decides. In fact, perhaps it’s even more beautiful for being less than perfect. Most things are.

She decorates her work with the cool blue-green and warm ochres, some of the darker green, and finally dabs of white. She breathes in the buttery-salty scent and turns her creation on its stand, checking each tiny section of its surface.

Finally, she reaches again into her white apron pocket and takes out a crystal vial. It sparkles in the light as she holds it firmly between finger and thumb. She removes the cork, takes a pinch of the contents and blows gently. Glimmering flecks of silver and gold, a little black and a few, sparse, touches of red settle on the surface she has made.

Finally, she is satisfied. She opens the door to her kitchen and carries her work outside. She is a master of her craft, and this is her masterpiece.

It sits, against the dark, star-pricked backdrop, turning slowly. It will stay there, for a little while, in this place where neither ‘little’ nor ‘while’ mean very much at all. It will stay until someone comes for it.

“It almost seems a shame to destroy it,” they will say.

And, in time, there will be nothing but crumbs.

Author’s notes
This story was written in response to a prompt about cooking. I started thinking about heat, and this year’s heatwave, and this is what came out of the oven…