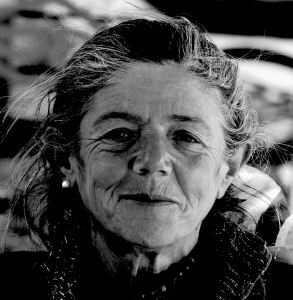 Breathing hard, Rina looked around the room she found herself in. Its walls had been painted plain white, and it was lit with bright spotlights. The air was dry and cool. There were no windows, and no furniture except for a single pedestal in the centre which held some sort of brass antique thing.

There was only the one door, and she’d come through it. No other exits. Outside, she could hear the ear-slamming sound of the alarm, mercifully muted in here, and the sorts of bangs and thuds made by, say, people opening and closing doors quite violently whilst running around in heavy boots. They were not, on the whole, friendly sounds.

On the other side of the room, Jin smiled. Rina had thought she was… elderly when she’d first met her. A little slow on her feet. Perhaps a touch of arthritis here and there. Now, standing with one hand on her hip, she seemed considerably more sprightly. Old, yes, but more the kind of old person who ran marathons at weekends, waving cheerily at youngsters who were puffing and throwing water over their heads as she passed by without even breaking a sweat.

There was no way she’d ended up in this room by mistake. “So, how do we get out of here?” asked Rina.

Jin shrugged and nodded at the door. “You can always go that way,” she said.

Rina noticed the emphasis. “And you?”

The woman said nothing, but the wrinkles around her eyes twitched.

“Come on, you have to help me! I can’t go out there! I’ll be caught, arrested! I can’t have a criminal record!”

“You should not have followed me.”

“There was a huge dog about to rip my arm off!”

“I taught you the whistle.”

“You taught me the whistle to make the damn thing attack me so that you could get in here!” Outside the door, Rina thought she could hear raised voices. It had clicked when she’d slammed it behind her. Had it locked?

“Perhaps. But you had a choice. You could have run the other way.”

“Funnily enough, I had the idea that the very fast dog with four legs might catch up with me!” There were bangs from the door. Rina thought she heard someone say something about a key.

“They’ll be in here in a minute! How are you going to get out?”

Jim grinned again. “I have a way.”

“Are you going to tell me what it is?”

“But,” said Jin, slowly, appearing to decide something as she spoke, “there is one thing you could say.” Her eyes flickered to the pedestal in the centre of the room.

“Oh, god, it’s not please, is it?” said Rina in desperation. The door behind her rattled.

Jin shook her head, looking a little disappointed. Her long fingers reached for the brass object on the pedestal. It had a loop of a handle attached to a wide section that tapered to a narrower spout. It was sort of shoe-shaped, if a shoe were placed on a small, upturned saucer and had a handle stuck on its heel. Rina thought she’d seen something like it before, somewhere. This was larger, and probably older, but…

Several things clicked into place in her mind. It was a lamp. An ancient, brass lamp. And the woman she’d followed into this room had said her name was Jin.

The lock rattled in the door behind her. “I wish you would take me with you!” she said.

Jin threw her head back and laughed. The door flew open and someone shouted something, but the sound dropped away. Rina’s skin tingled, her vision turned first black and white, and then, just black.

“Where am I?” said Rina, pushing herself into a sitting position.

“Welcome, child!” said Jin, cheerfully. “This is my craft. I call her The Slipper!”

Unlike the other pieces on this site this is not a complete work. It’s something which starts here, with this first scene between Rina and Jin. These characters had been bouncing around in my brain and my notebook for some time, and I decided to let them out. And then, once they were out, they started clamouring for more.

You can read the next part of their story here.